I have noticed a serious increase in cranky posts on FB about gender roles and women in particular.  It’s currently a hot topic and as it’s discussed it seems to get hotter and more volatile.  What is right?  What does it look like to have true equality?  I don’t think laws leaning in any direction will ever accomplish what people desire.   If people feel respected and cared for, the anger will diminish, but, what does that look like?  I feel that I have experienced it while working for the government, but it might look and feel differently in actuality than in thought.

From the burning of the bras (Really ladies?  No support is NOT comfy!) to the advent of the extra padded push-up kind, we women seem to put a lot of passion and argument in what it means to be female.   Our strong beliefs leading the way to anarchy or revolution-depending on which side of the issue you are on.  What is the true all American girl?  Is she more like Barbie or more like G.I. Jane?  How should she be treated?  I think I might have an inkling.

When I was on the trail crew for the Forest Service back in the 90s we came across some gender work differences.  Generally we would spike camp (tents) back in the woods somewhere for 10 days and work from camp.  Definitely a rustic experience and with 4 person crews the government required that if there was one girl on a crew there had to be 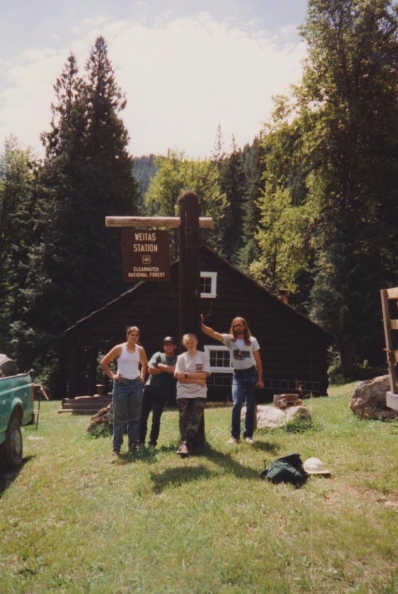 Us-We’re a spiffy looking bunch for sure!

Sometimes we would work with other crews on big projects and sometimes we were on our own.  For one particular work site we had the privilege of staying at Weitas Guard Station in Idaho.  Built just after 1900 it was rustic, but compared to camping it was bliss!

On this particular 10 days we would not only be working on the trail that lead out of the station but we also would be repairing a bridge.  As a friend of mine would say; “fun times and the apocalypse!”  We arrived, we cleaned, and set up our areas and then we got to work.

When it was time to repair the bridge there came some discussion on who would do what.  The problem being that this bridge didn’t cross over an adorable burbling brook-it crossed a river that was fast and deep.  They needed to have people in the water supporting the bridge while they did the fixing.  The boss and the boss’s boss, who were there to lend a hand on the project, were concerned about my female compatriot and me.

Me on the very top of a tree over a 100 foot tall when it was alive-we had to cut through the trunk close to the base which lay across the trail and was thicker than any of us were tall.

For all our work alongside our male counterparts and a half summer of muscle building under our belts…our bodies differed from the guys.  I’m not even talking about the differences requiring unique undergarments.  A woman and man of the same size and weight will have internal differences.  We ladies have more of a percentage of fat per muscle ratio (I think that has something to do with the whole child bearing thing…) and the average man will have more muscle and bone for the same size, including more upper body strength.  So men are scientifically denser.  (Stop thinking about their brain-you know what I mean!)

The bosses were concerned that we gals wouldn’t have the ability to stay safe in the rushing current.  It would be easier for the water to cause us to flounder and the required upper body strength and stamina to support the bridge…well we might not have it.  They asked our opinion to which we said we would do whatever was needed and they went off to talk.  When they got back they let us know that since safety rested in each person’s strength and the ability to not be taken down by the water-we would sit this one out.

We girls chatted in our little cabin that night about the decision.  We were a bit bummed-we had conquered some crazy things that summer, but we were also a little bit relieved.  What if one of us floundered slightly and that hurt not just us, but our other crew mates?

The next morning the boys went off to conquer the river and the bridge and we sat on the front porch.  What now?  We couldn’t just sit around all day…  We went in the

station and stood in the kitchen thinking.  Then we opened every cupboard and drawer to see what treasures we could find.  We found cinnamon as well as some other spices, a pie tin, tapioca and some other odds and ends.  We dug through our own supplies and had butter, graham crackers, sugar and apples.  We were in business!

It felt like the kitchen itself came to life with excitement as we started cleaning, washing, crushing, chopping.  We lit the gas stove and set the apples to simmer with cinnamon and sugar.  We melted the butter and mixed it with the squished graham cracker crumbs and then pressed that into the pie plate.  The apples were just beginning to fill the old station with timeless scents when the boys came in for lunch.

Cold, wet and hungry the clumped through the door exclaiming at the top of their lungs that they could smell our efforts at least a half mile down the trail.  One of them who we knew to be a scamp in a man’s body walked straight up to the stove, gleeful look on his face and aimed a finger at the fruity goodness in the pot.

Both of us gals whirled on him with spoons brandished and issued the war cry of our sisters through the ages:

“Don’t you dare!  That’s for dinner!”  Seeing his window of thievery coming to a swift close he dipped, slurped, and ran, ducking two spoons and yelling back over his shoulder that it was perfect.  We looked at each other and laughed then wondered aloud how he could handle the heat of the apples.  Men!

The boys went back to the bridge and we baked our crust, set the apples to cool and got busy with another project.  The boss had found a recipe for trail ice cream and we had made sure to bring what we needed to make it on this trip.

I took on that chore while my compatriot got a simple supper going in the kitchen.  I put the ingredients in a small coffee can and taped it shut, then put that in a large coffee can and surrounded it with ice and rock salt-then taped it shut.  I kicked it back and forth across the porch for half an hour and then checked it-icey creamy goodness!

The boys drug themselves in shortly after and reported the job done and, “please God never again!”  Supper was had and then…dessert.  The weary lackluster countenances flew to life with the speed of a divine miracle.  Coffee was made, cheap shots exchanged, and laughter ruled.  The pie plate was literally licked clean and ice cream put on everything from pie, to coffee to fingers (waste not, want not, right?)

A swampy area that we fixed drainage for and then raised the trail.

We gals had not helped with the bridge fixing in a hands on way, but I truly feel to the core of my being that we were a huge help!  Should we have been down the trail at the bridge?  Would it have been fine?  Or would someone have gotten hurt?  That, is only for God to know.  But the short of it is that we were a team that cared about each other.  We, all of us, helped each other.  We took each other’s needs and abilities into consideration 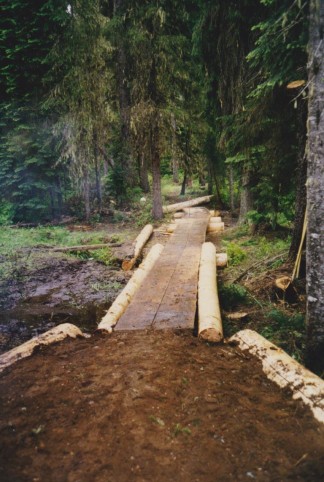 The bridge we were building without motorized tools

One of the guys was allergic to bees, we girls weren’t.  On the trail when we had to deal with bees we considered our crewmate first.  And here, with a bridge project the guys had considered us.

That summer we accomplished more than I honestly knew was humanly possible.  Some of it just plain grit hard!  For example:  we packed a rock drill into the woods so the explosives folks could blast open a trail, we cut through the trunk of a tree that had fallen across the trail and that trunk was thicker than we were tall, we had built a bridge in a “wilderness area” which simply means that you can’t use tools with a 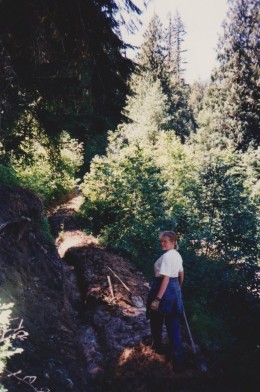 Another trail with a drainage issue.  I don’t believe my boots ever forgave me for that…

motor…  Yup, draft horse and chains and large iron poles were our tools; I was just glad the saw guys had already cut everything with the crosscuts.  We fixed drainage problems and sunk up to almost our knees in mud.  It was a great summer!

What does it look like to be respected and cared for by coworkers?  I think it looks kinda like this.  Folks willing to work as a team-using strengths to the best of their ability and looking out for each other in situations where some aren’t as strong, no matter the reason.

For any of you camping types who want to make ice cream on your next trip…  Here’s the boss’s recipe!

13 oz coffee can (soon to be filled with creamy goodness)

In the small can put:

Tape up the lid on that can nice and tight and then put it in the big can and layer ice and rock salt to the top.  Tape on the lid.  Now keep the can rolling for at least 30 minutes.  I just walked and kept booting it gently with my toe.

When it’s done you can top it with M&Ms, nuts or whatever floats your boat.  One time we squished up a banana and put it in with the cream and it was wonderful!

2 thoughts on “Life, the Universe and Gender Identity”